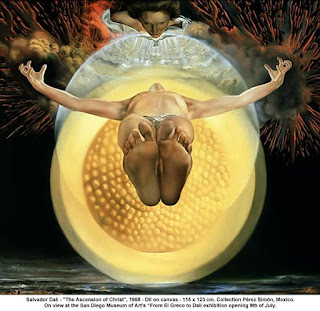 I have long been struck with the perspective of the above picture of the Ascension.  Are we left here on earth looking up at the ascending feet of Jesus?  In the Gospel of Peter, a work that is generally not accepted as be authoritative, we see a resurrected Jesus coming forth from the tomb escorted by angels and followed by the Cross.  The Cross is speaking as a living being and Jesus rather than ascending as above extends into the heavens from earth all the way up.

In a way both interpretations are fantastic, but also in a way they both may hold some truth.  The Jesus that walked on earth was no longer in the presence of his followers.  He had walked with them and then been killed on the cross.  He was then with them again, but now was gone again.  This time he had gone to be with the Godhead and a new energy filled the followers.  There was also a belief that Jesus would come back again and this time to make real changes. "See, I am coming soon; my reward is with me, to repay according to everyone's work. I am the Alpha and the Omega, the first and the last, the beginning and the end." (Rev. 22:13)

This all was nearly 2000 years ago.  So what does "I am coming soon" mean?   Revelations wasn't written in English, but Greek and we work from a translation.  The word that is translated "soon" can also mean "suddenly".  We really don't think of 2000 years as soon, but Jesus could still come suddenly.  In fact, Jesus warns that his coming will be unexpected and sudden and that we should be constantly prepared.

The other aspect here is that just after the Ascension the Disciples had an infusion of the Holy Spirit.  What is the Holy Spirit?  God with us and in us, to guide us and support us on the way.   This is the way that the writer of Luke Acts portrays the time immediately after Jesus Death and Resurrection.  The other Gospel writers describe things quite differently " Jesus came and stood among them and said to them, “Peace be with you.”  When he had said this, he showed them his hands and his side. Then the disciples were glad when they saw the Lord.  Jesus said to them again, “Peace be with you. As the Father has sent me, even so I am sending you.”  And when he had said this, he breathed on them and said to them, “Receive the Holy Spirit.  If you forgive the sins of any, they are forgiven them; if you withhold forgiveness from any, it is withheld.” "(John 20:19 and following)  The question in my mind is "Does the Ascension mean Jesus left or does it mean something quite different?"   What does "I will be with you always" mean? Does Jesus appear to us today still?  These are deep questions, but I am sure that somehow Jesus still moves within us and with us and still show us the way.
Posted by Michelle at 10:29 AM 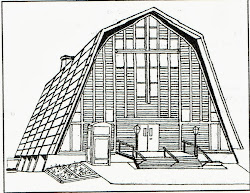